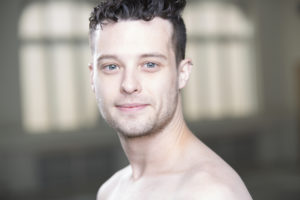 Kyle Mullins is a dance artist based in Kansas City, MO. He is a current Charlotte Street Foundation Studio Resident and is the founding artistic director of the Kansas City based contemporary repertory company Cerca Trova. He produces and curates Making Moves, a monthly dance performance series he founded in 2019. He also serves as producer for Kansas City’s NACHMO hub and Kansas City's annual "A Modern Night at the Folly". In 2018 he received an Arts KC Inspiration Grant to begin work on his Ted Shawn Project, a project dedicated to bringing Ted Shawn's work back to his hometown, Kansas City, MO. He has recently set work on City in Motion Dance Theater, Lawrence Dance Intensive, and Cottey College, and worked with theater students at Johnson County Community College. He has choreographed for Kansas City's The Unicorn Theater and Kansas City Public Theater. He holds a BFA in Dance from the University of Arizona and a MFA in Dance from New York University’s Tisch School of the Arts.

Kyle was born and raised in Overland Park, KS. His early training was at Miller Marley School of Dance and Voice, and he then went on to the University of Arizona where he earned his BFA in Dance. While studying in Arizona he was awarded a summer scholarship to Giordano Jazz Dance Chicago, Lou Conte’s (studying with Hubbard Street Dance Chicago) and a summer apprenticeship to River North Jazz Dance Chicago. He later went on to earn his MFA in Dance from New York University’s Tisch School of the Arts as a Dean’s Fellow.

In New York City, Mullins danced with the Second Avenue Dance Company, The Steps Repertory Ensemble, dre.dance, Nicholas Andre, Bill Young/Colleen Thomas and Dancers, and York Dance Works. He has has worked with choreographers Crystal Pite, Donald Byrd, Benoit-Swan Pouffer, Aszure Barton, Sean Curran, Camille A. Brown, Nathan Trice, Cherice Barton, Andrea Miller, Larry Keigwin, Shannon Gillen, Zvi Gotheiner, and Gregory Dolbashian. Since relocating back to Kansas City, he has had the pleasure to perform works by Mary Pat Henry, Gary Abbott, Shapiro and Smith, and Kevin Iyega Jeff with Wylliams Henry Contemporary Dance Company. He has performed at The Joyce Theater, Dixon Place, Danspace, and on several Broadway stages for BC/EFA events. He has performed for Kansas City Starlight in “The Music Man”, for Royal Caribbean Cruise Lines, and on "One Life to Live”.

As a choreographer, he has most notably choreographed the Off Broadway production of “Triassic Parq: The Musical”, for which he was nominated for a Lucille Lortel Award for Outstanding Choreography. He has shown work at Steps on Broadway, BC Beat, Triskelion Arts, and the Jack Crystal Theater. He has choreographed on City in Motion Dance Theater, the Second Avenue Dance Company, and several musicals for the New York Fringe Festival, Capital Fringe Festival (DC) and Vital Theater Company (NYC) as well as Music Theatre Kansas City.

Kyle currently teaches at City in Motion in midtown Kansas City. He has previously served on faculty at Miller Marley School of Dance and Voice and with Kansas City Ballet’s R.O.A.D. Program. He has taught contemporary dance at Steps on Broadway, Gibney Dance, and at studios throughout the Tri-State Area and Midwest. He also taught with the Hudson Guild in NYC, a continuing outreach program he co-founded, and has taught children in Cape Town, South Africa with Ikapa Dance Theater.

The University of Arizona dance program provided me with a diverse training platform and instilled with in me the drive, rigor, and curiosity needed to make a career in dance. The program provided countless performance opportunities, professional development, and a strong sense of artistic community. I am forever grateful that my training led me to Tucson and UA Dance!