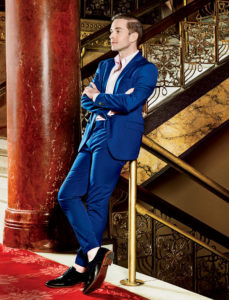 Immediately after graduating in 2009, I moved to Chicago to join Giordano II as a dancer. After one year I was promoted to the main company with Giordano Dance Chicago where I danced for seven seasons premiering works by esteemed choreographers like Peter Chu, Ronen Koresh, Ray Leeper and more. In 2013, I was named Director, Giordano II, and in 2017, I took my final bow with the Company. Since then I've continued my role as Director, Giordano II, and I've also taken on the position of the Company's first Operations Manager.

Since taking on the role of Director, Giordano II, I've created seven original works for the second company and two original works for GDC's main company. I've continued to nurture my choreographic voice outside of GDC as well with commissions from DanceWorks Chicago, Missouri Contemporary Ballet, Nomi Dance Company, Visceral Dance Chicago, and Wonderbound. My commercial and theater credits include the closing work for "Sing! Featuring Elton John," and most recently Disney's NEWSIES at the Paramount Theatre in Aurora, IL, which received a Regional Broadway World nomination for Best Choreography. I've been honored to travel throughout the country teaching for conventions and workshops in hopes of elevating contemporary dance while supporting it with a strong foundation in technique.

The University of Arizona School of Dance is where my career really began. High caliber training, consistent onstage experience, and choreographic opportunities: UA Dance provided me all of the tools I needed to prepare myself for success upon graduation. UA Dance provided support when I began receiving professional choreographic opportunities while still enrolled as a student, and when I had a wild idea to self-produce “dance in the RED” as my senior project, the school offered the Eller Theatre and their unwavering knowledge and endorsement. Like anything in life, you get out what you put in, and with a program that supports a young artist's big ideas anything seems possible for the future. All of these experiences during my undergraduate career have directly influenced and impacted my success over the past 10+ years.