Tucson, Arizona ˗ Get ready for a taste of Cabaret, a slice of Broadway, the gusto of George Gershwin, and the elegance of Steven Sondheim. You will be swept away by the songbird that is Liz Callaway.

A Tony nominee and Emmy Award-winning actress, singer and recording artist, Liz Callaway made her Broadway debut in Stephen Sondheim’s Merrily We Roll Along, received a Tony Award nomination for her performance in Baby, and for five years, won acclaim as Grizabella in Cats. She has also starred in the original casts of Miss Saigon,The Three Musketeers, and The Look of Love. Other New York appearances include the legendary Follies in Concert at Lincoln Center, A Stephen Sondheim Evening, Fiorello! (Encores!), and Hair in Concert.

Also familiar to you will be Liz singing the Academy Award nominated song “Journey to the Past” in the animated feature Anastasia. You may have heard Liz as the voice of Princess Jasmine in Disney’s Aladdin and the King of Thieves and The Return of Jafar. Other film work includes the singing voice of the title character in Beauty and the Beast, The Swan Princess, and The Lion King 2: Simba’s Pride.

Bon Appetite, a piece by Michael Williams offers a colorful pallet of visual impressions of Paris. And you too, walked away, by Hayley Meier, incorporates a poem by Najwa Zebian and speaks to love, longing, and loss. Unicorn a poignant solo, and the final work created by the late David Berkey, is a reflection on his emotions facing death. Dazzling tap duo, Brendan Kellam and Brianna Mull return to the stage in a new lively composition.

Don’t miss this unique evening of song and dance: On Stage with Liz Callaway and the UA Dance Ensemble!

On Stage with Liz Callaway and the UA Dance Ensemble is presented as part of the Tucson Desert Song Festival. 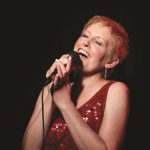 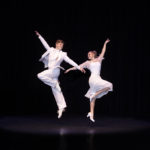 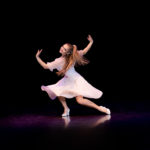