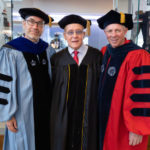 For over 30 years, Tremaine has served as a guest artist at our Arizona Jazz Dance Showcase in alternating years since 1992. He graciously offered his talent, experience and wisdom to young dancers refusing any fee. In addition, Tremaine has been an outstanding advocate for the University of Arizona School of Dance. At dance conventions that crisscross the nation, Joe educates and inspires 50,000 dancers a year. He recommends our School enthusiastically to attendees at his conventions and competitions and, as a result, over half of our dance students have had contact with him prior to their arrival on campus.

The College of Fine Arts celebrates this 30-year relationship by bestowing Mr. Tremaine with an Honorary Doctor of Fine Arts degree.

A native of Oak Ridge, Louisiana, Tremaine began attending dance classes as a young child. After college, he trained and performed with the New Orleans Ballet Association and New Orleans Opera before moving to New York City.

Tremaine has performed in Europe with the French-Italian performer Caterina Valente, and he’s also been on “The Jackie Gleason Show” and specials of “The Ed Sullivan Show.” In 1967, Tremaine was asked to be the lead dancer on “The Jerry Lewis Show,” which brought him to Los Angeles, where he led a successful career as a performer. He also worked on the 1969 movie “Hello, Dolly.”

Tremaine opened a studio in California in the 1970s, called the Joe Tremaine Dance Center, where he taught thousands of dance students over nearly 30 years. Tremaine now serves as president and co-founder of Tremaine Dance Conventions and Competitions. Established in 1981, the educational dance company tours about 25 U.S. cities each year, reaching about 50,000 dancers.

Tremaine holds a bachelor’s degree in psychology from the University of Louisiana at Monroe. He has received the Gus Giordano Lifetime Achievement Award from the Jazz Dance World Congress and the Excellence in Jazz Dance award from Dance Educators of America. He also has served on the University of Southern California’s Glorya Kaufman School of Dance Board of Councilors and the Jazz Dance World Congress’s Board of Advisors. 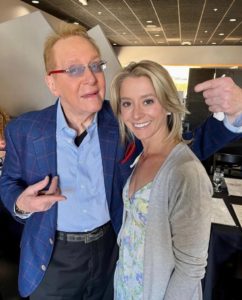 “I was honored to be invited to brunch with longtime teacher, educator, and dance icon, Joe Tremaine,” writes School of Dance alumna and Assistant Professor, Hayley Meier. “A large part of why I am a dancer today is because of the teaching and opportunities that he gave to me as a young child attending his conventions. I have only the fondest memories of my time as a Tremaine girl ♥️. It is because of him and his teachers that I discovered the U of A way back in 2005, and so began my journey here …”