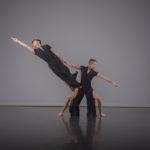 Not on your season subscription but on your calendar!

This one-act performance brings together works inspired by swing-era Billy Strayhorn to present-day Pink, and jazz dance styles in between.

The Man Behind Duke, choreographed by Sam Watson, features the music of Billy Strayhorn who was the composer, lyricist, and arranger for big band leader Duke Ellington. Watson’s new piece for eight dancers reflects back on the swing era taking inspiration from standard dance steps spanning three decades including The Shag, The Swingout and standard East Coast and West Coast Swing.

Also on the program is a piece by Autumn Eckman called Sardine, originally choreographed in 2015 and recently performed by UA Dance as part of the Front and Main Dance Festival in Temecula, CA and at the Black Box International Theatre and Dance Festival in Plovdiv, Bulgaria. The piece investigates ways in which human interaction forms relationships and makes visible connections between our external world and internal states.

Back by popular demand is Michael Williams’ piece STYX about the Greek mythological river between Earth and the Underworld. An intense score by the Israeli band, Infected Mushroom, provides a powerful and entrancing musical backdrop.

Pink’s 2017 release of her album Beautiful Trauma is the inspiration for Michael Williams work for three couples entitled Sticks & Stones. This contemporary lyrical jazz piece calls for positive evolutionary change and the personal and societal commitment it requires.