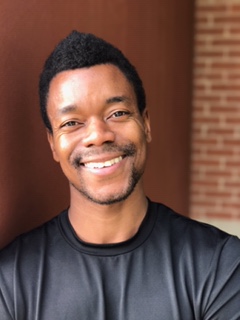 Marquez Johnson holds a Master of Fine Arts in Dance degree from the University of Arizona as well as a Bachelor of Fine Arts in Dance and a Bachelor of Arts degree in Communication.  Marquez is currently on faculty at the University of Arizona’s School of Dance as an Instructor of Dance choreographing for various local events while teaching Jazz and Hip-Hop which has begun for the first time in the Fall of 2019. Marquez is also an instructor for Step-Up; an outreach dance program through the College of Fine Arts teaching at local public and charter schools in and around Tucson.

Under the direction of Tammy Dyke-Compton and Christopher Compton, Marquez returned for a second summer to Perry-Mansfield Summer Performing Arts Camp in Steamboat Springs, Colorado. As a teaching artist for the Emerging Artist program in June and July, he continues to teach Jazz and Hip-Hop as well as choreographing for such musicals as Frog and Toad.

Marquez has been a guest artist for the Montana Dance Arts Association teaching hip-hop, and he has been a guest artist for Ballet Rincon in their production of The Nutcracker as well as choreographing and teaching their ballet ensemble. He has taught at many studios, most recently at Danswest Dance studio in the Jazz and Lyrical categories. He continues to teach in other studios around the area in styles ranging from Ballet to Modern and Contemporary.

Marquez has performed works by Jose Limon and Ohad Naharin while also being a rehearsal assistant for Miguel Perez and Michele Gifford in the re-staging of “The American by Charles Wheeldon. Under the direction of Michael Williams, he has participated as a co-host for the Arizona Jazz Dance showcase while also completing his thesis work entitled Forecast. Currently, he is choreographing for Casino del Sol for their run of Solebrity Icons.

Marquez has finished his 9th season as a company member of Tucson-based contemporary dance company Artifact Dance Project where he danced the lead role of Goliath in March of 2019. As well, he has performed in several productions for Artifact since 2009 including Fairy Tales Three, Poe, Artist's Proof, The Grand Parlor, Judith, Downtown, Frida and New Moves to name a few.

Due to the uncertainty surrounding the trajectory of COVID-19 in the coming months, we have made the difficult decision to postpone Arizona Jazz Dance Showcase 2020.

We are closely following trends in case numbers and health guidelines. The Arizona Jazz Dance Showcase may be rescheduled for Spring 2021. We will continue to send updates as we know more about AJDS future dates.

With deep appreciation & gratitude for all of our AJDS participants, we look forward to our next event.
.
Photo by Ed Flores featuring UA Dance Ensemble member Hayley Meier. ... See MoreSee Less

Thx for info, look forward to Spring 2021. Will there be any fall 2020 performances?

UA Dance stands in solidarity with our artists of color. We strive to create a safe space for black artists and members of our community to thrive. We are committed to listening, improving, and holding space for the important conversations that are needed and overdue. Black Lives Matter.
#blacklivesmatter ... See MoreSee Less

Ms. Ernst’s career began as a featured dancer, touring internationally with the Lewitzky dance company for over a decade. After her work with the company, Amy was hired by the Kerlan-Jobe Orthopaedic Clinic in Inglewood, California as a physical therapist for three and a half years. In 1995, after receiving her MFA in dance from the University of Washington-Seattle and teaching at the University of Nebraska-Lincoln, Ms. Ernst joined the UA School of Dance faculty. Amy has shared her insight and wisdom of dance with generations of young artists, teaching all levels of Modern Dance Technique and Choreography, Dance Injury Prevention, Dance Kinesiology, and Biomechanics for Dance.

During her time at the University of Arizona, Amy was a teacher, a choreographer, a mentor, a friend, and most importantly, family.
Congratulations Amy! We can’t thank you enough! 💗

Thank you for everything Amy. Happy retirement and congratulations! Good luck on everything the future has in store for you.

Happy retirement Amy! Congratulations! Thank you for being you. Best of luck on all of your new advatures that await.

Aww happy retirement Amy!!! Thank you for everything !!! Congrats and wish you only the best !! Xoxoxo

Thank you for being a wonderful teacher, choreographer and mentor. Congratulations on your retirement. ❤️

Happy retirement Amy!! Thank you for all you put into the UofA dance program, it truly was a special place for me personally because of you! Best of luck on all your new adventures ahead!! ❤️

Happy retirement Amy! You have given so much into each student, class, and day. It’s time for you to give to yourself. Thank you for inspiring us and made myself who I am with your care and guidance. I hope this time to yourself repays you all that you’ve given. 💕

Happy Retirement, Amy!! You've been an inspiration to so many 💖

Brava Amy, blessings for a wonderful retirement as you join the rest of us dancing "babies."

Thank you for your sincere heart Amy! You gave so much to so many and we took it in thousands of directions. I'll never forget you. Sending love and prayers to you always. Congratulations!!! 😊❤🙏

Congrats! You made it!

A true pleasure to be able to work with Ms Ernst these past six years. All the best for the travels ahead.

All the Best! It was great working with you....

Amy, you forever touched my heart, my soul and my artistry. Then you and Godspeed 💖

Today we celebrate The UA School of Dance Graduating Class of 2020. From the countless hours spent in the studio to all of your shining moments on stage, you each have worked so hard and triumphed in the face of adversity. Today, WE CELEBRATE YOU!
We encourage everyone to visit graduation.cfa.arizona.edu to partake in the College of Fine Arts virtual ceremony tonight at 4:00 pm PDT (7:00 pm EDT). ... See MoreSee Less

You are all amazing artists. Congratulations on your achievements.

Congratulations! 🎉🍾🎈🎊 The world is waiting for you!

We’ve launched “Alumni Stories” on our website! This new interactive feature will help keep us connected to all the UA Dance alumni around the globe. To our current and soon-to-be alumni, we want to hear from you! bddy.me/2WgrG8b

Fantastic and congratulations! 🎉 Best wishes for your bright future!

🌹Congratulations beautiful job! My son's girlfriend dances with UofA, another amazing talent, absolutely loves it and speaks very highly of it.

#Bethechang You are a force of good in this world. Go forth and spread those wings! Thank you The University of Arizona School of Dance and every single person in her circle who ever believed in her, challenged her, and supported her journey so far. Thank you village. We are all so proud of you Delphine Chang💗

Congratulations 💓 So proud of you!!

Wow, what an honor! Congrats!

Congratulations Delphine! You’ve always been a star 💫 to me❤️ You move through life as you do dance with beauty, style, and utmost grace.

Thank you for this! So much love for my UA Dance fam ♥️